There is no category

The silver screen once featured nothing but black, white, and varying shades of gray.  These early times birthed the iconic image of King Kong battling puppet-like airplanes while clinging to the toothpick model of the Empire State Building. They brought to life a little blue police box spinning on a bit of twine. This age also birthed Rod Sterling and the ever-unnerving Twilight Zone. Over fifty years later, the modern movie goer believing these effects to be credible borders on ludicrous. 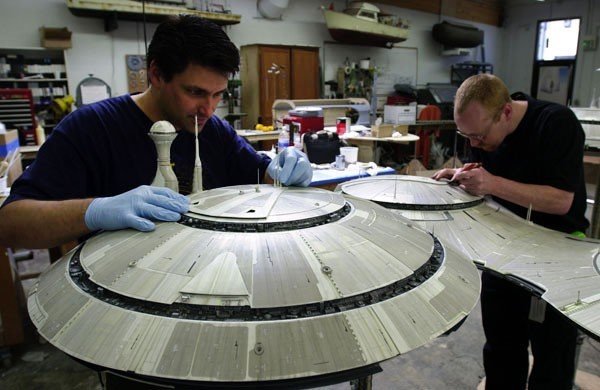 In the common mind, movie miniatures belong in the same place as old family photographs, typewriters, and cassette players. In the age of CGI and digital effects, who needs to spend all that time with sticky fingers and crossed eyes? Who would try to fool their audiences with tiny cars, bits of string, and scale models? The answer is both simple and surprising: Hollywood. In direct contradiction to what many believe, scale models still hold their place in filmmaker's hearts, souls, and budgets.
The first documented use of a model in popular film came with the movie adaption of Arthur Conan Doyle's The Lost World. However, it was that era's King Kong that popularized the use of scale modeling. Precise stop-motion and rabbit fur brought the eighteen-inch tall ape to life. Joining him in theaters was a cast of tiny planes, tinier buildings, and minuscule trees. Through use of rear projection, a technique still utilized in modern movies, viewers became convinced that full-sized actors were far more David than Goliath.
While "King Kong" started Hollywood's fascination with models, no new technique has managed to end it. The elven cities of Minas Tirith and Rivendell in "Lord of the Rings" came to life through use of forced perspective and masterful artistry. The Nostromo, larger than life on screen in "Alien", was also the work of master modelers. "Back to the Future" rarely utilized a DeLorean as it rocketed the viewer through time itself. Making all quiver in fear at shaking water glasses, the Tyrannosaurus in the original "Jurassic Park" was actually shorter than his barnyard cousins.
The Batmobile in "The Dark Knight" rarely measured up to the average person's thighs. Even in the film "Inception", released in 2010, filmmakers relied on the magic of detail, green screen, and other setting tricks to force the viewer's perspective. Why do we still rely on miniatures in the 21st century? Why would someone put together a model car kit when the real thing is parked right up the road? Why go for the antiquated when computers can create any setting with a few clicks?
Do you remember "The Phantom Menace"? Any true "Star Wars" fan likely cringed at its mention. Aside from its use of ever-annoying Jar-Jar Binks, the film received scorching criticism for its over-reliance on computer-generated effects. While modern computers make the super ones of that age look like Texas Instruments, they still fail to produce realistic scenes on many fronts. Some actors find it more difficult to interact with things they cannot see or feel, as opposed to miniatures. The way a light hits a screen-created image may leave the discerning viewer with a feeling of "wrong" in their guts.
For filmmakers like Christopher Nolan and Peter Jackson, miniatures provide a sense of realism and consistency not easily achieved by digital means. Shadows do not have to be guessed at or analyzed. They are true-to -life and convincing. Finally, in many ways, models remain an economical way to film. If your choice is between exploding a real truck and a model, the latter will always be the cheaper choice. Even in the 21st century, miniatures still remain a viable option in the filmmakers' tool box. When combined with well-rendered digital effects and well-scripted actors, the results are realistic and convincing.
Whether bringing to life the Batmobile or the city of Rivendell, scale models still hold a prominent place in Hollywood. For all the model hobbyists out there looking for a career - one that allows them to do what they love - it might be wise to consider a career in special effects. The continued faith to the techniques of film's Golden Age proves the continued viability of miniatures. If, for example, you wish to recreate your favorite miniature film set from movies such as "Jack Reacher" or "Scooby Doo", you should consider utilizing the source-faithful models found on Model Kit Central.
If you're seeking inspiration or a better understanding of how building scale models can jumpstart your career in Hollywood special effects, please consider the following list of suggestions:

There is no related article