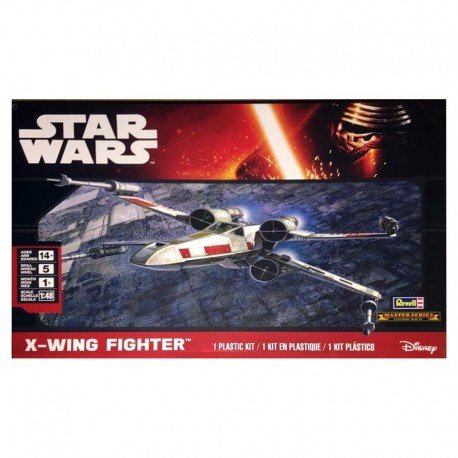 Whether you fly with your targeting computer on or choose to use the Force, you're going to love Revell Model Kits' X-Wing Fighter! One of Revell's premier 'Master Series' line of kits, this plastic model features outstanding realistic details that rival the studio filming models. The Rebel Alliance's primary Starfighter and one of the most advanced single-pilot starships ever produced, the X-wing takes its name from its double-layered wings, which separate into an 'X' formation during combat to increase the pilot's field of fire. Along with four high-end laser cannons, the X-Wing is equipped with proton torpedoes, deflector shields, a hyper-drive engine, and an Astromech droid.

The X-Wing was Luke Skywalker's vehicle of choice, and was used by the young Jedi to destroy the first Death Star at the Battle of Yavin. The assembly instructions are clearly laid out with excellent reference photographs, a parts map, and a painting guide. Decals are provided as well. The kit comes with screws for major sub-assemblies covered by the major hull assemblies. It's an impressive kit that will help you in your mission to attack the Death Star with the rest of your rebel friends.

11 other products in the same category: