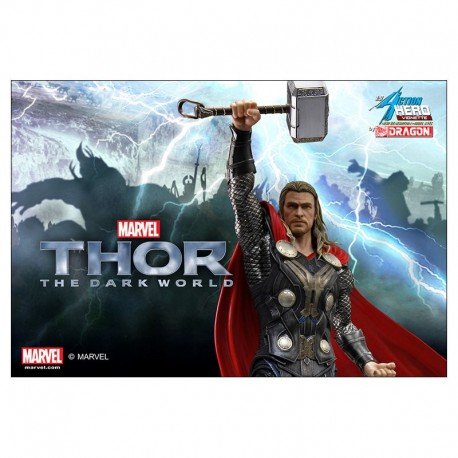 Dragon Models and DART (Dragon Advanced Research & Technology) recently introduced their latest innovation in 3D technology, Marvel Avengers "Action Hero Vignettes" (all in 1/9 scale). Create the Mighty Thor (from the film "The Dark World") as a highly detailed desktop display with just the snap of a few pre-painted parts! A hybrid between a display figure and a kit, Dragon brings us the best of both worlds. The use of model kit techniques has enabled them to reproduce the intricate details and sharp lines necessary to maximize the usage of the official 3D Marvel character scans.

The use of the static display concept ensures that there are no cooling lines on the torsos and no visible ball joints that are prominent in most "action" figures. Additionally, the figure is set in a Marvel suggested pose so that the body portions won't be deformed when the poses are changed. Comic book fans, collectors, novice model kit builders and seasoned pros can enjoy the experience of a quick clean build up into a very detailed and accurately-rendered display figure of the God of Thunder.

10 other products in the same category: