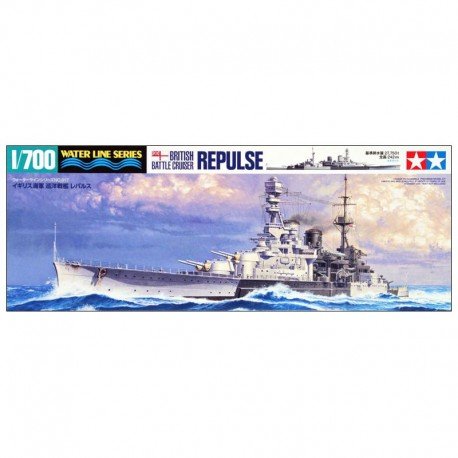 Launched in 1916, the H.M.S. Repulse took part in WWI naval actions before being refitted during the inter-war years. In WWII, the Repulse was in a naval engagement that took place off the coast of Malaya. On December 10, 1941, she was sighted by Japanese aircraft, attacked and ultimately sunk along with the H.M.S. Prince of Wales. Tamiya has produced a quality model ship kit with this release of the H.M.S. Repulse which commemorates her noble contribution and builds up to a finished length of 13-1/2 inches at 1/700 scale.

The plastic kit includes 220 detailed parts with crisp moldings for a flawless fit. Included are rotating main guns, 3 x 10.2 CM multiple barrel guns, 8 pom-pom guns, anti-aircraft parts and the carrier-based Supermarine 'Walrus' floatplane. The seams have been engineered to be unseen after assembly. A two-page, clearly illustrated instruction sheet guides you though your build with painting assistance as well. The accurate decals include markings for the Walrus floatplane. Sail into history with this great ship model from Tamiya (and bring a life jacket...)!