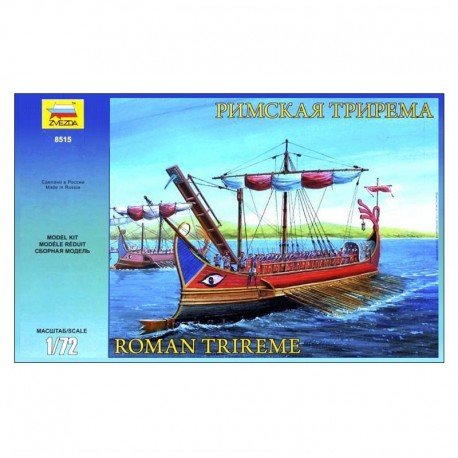 If you were an officer in the ancient Roman naval forces, you'd be at the helm of this marvel of engineering. Triremes were triple-decker warships that were the key to power for the ancient Romans, Greeks and Phoenicians. Three rows of oars were arranged on three levels near the waterline making the ship both fast and agile. A bronze ram served as the main weapon and was supported by archers at the bow and stern.

This warship was said to be the dominant ship of its kind in the Mediterranean during the 7th to 4th centuries BC. The Zvezda Trireme plastic model ship is 22 inches long in 1/72 scale and features finely detailed wood grain and planking detail, three rows of oars, sails made of hard plastic and thread for rigging. It also comes with a base and fully illustrated instructions. The detail on this beautiful ship offers great weathering opportunities for washes and dry-brushing.