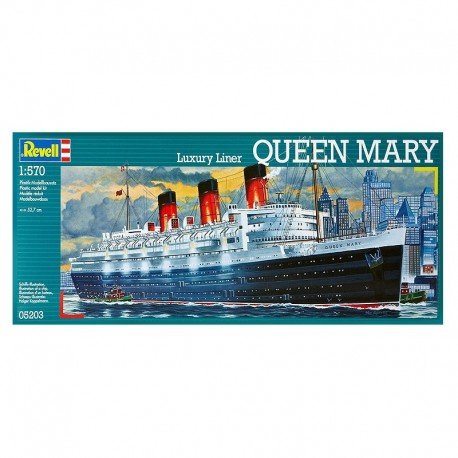 Notify me when available
Rating

The 'Queen Mary' was one of three 80000 BRT superliners built in the 1930's. When the Second World War broke out, the liner was converted and used as a troop carrier for 15,000 soldiers. After the war, the Queen Mary returned to North Atlantic passenger service. In 1967, the Cunard White Star Line sold the ship to the town of Long Beach, California where it has operated as a floating hotel since 1971.

You can recreate part of that romantic era of cross-Atlantic luxury sea travel with Revell-Germany's 1/570 scale Queen Mary model ship kit.  The plastic kit includes 205 detailed parts, 28 lifeboats, vent pipes and funnels, and a display stand.  The detailed illustrated instructions also provide a helpful painting guide.  Waterslide decals and a flag chart are also included. This scale model of the Queen Mary will make a majestic addition to any ship modeler's collection!

I want to buy this but can’t see how to do this.

You should’nt be posting this item until you have it in stock/inventory. Please get this model so that I can order it A.S.A.P.