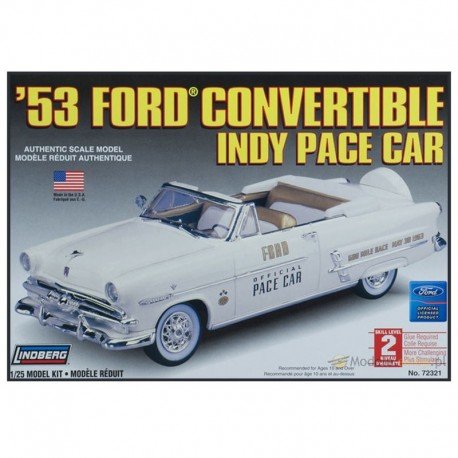 Honoring fifty years of Ford, the company was elected to design the 1953 pace car. The result? A beautiful white and gold Sunliner. This easy-to-assemble Lindberg model car kit features gold-trim, detailed engine, and a variety of chrome-plated parts.

In celebration of their Golden Anniversary, the Indianapolis 500 granted Ford the honor of developing the 1953 pacing car. From the minds of its engineers, and the styling choices common to the 1950's, the 1953 Ford Sunliner was born. Its eye-catching anniversary gold and white color scheme instantly earned the attention of racing fans everywhere. Driven by the Ford family on the track, visible to thousands at a time, it soon became something every dealer window clamored for.

With only 2000 ever produced for public consumption, this car became the victim of rampant forgery. In this easy-to-build Lindberg 1/25 scale car kit, you are guaranteed an exemplary example of the real thing. Aside from replicating the pace car’s gold trim, this plastic model car features a detailed engine, rubber tires with white walls, chrome-plated parts, and custom pace car decals. Allow this commemorative rarity a well-deserved place in your collection.