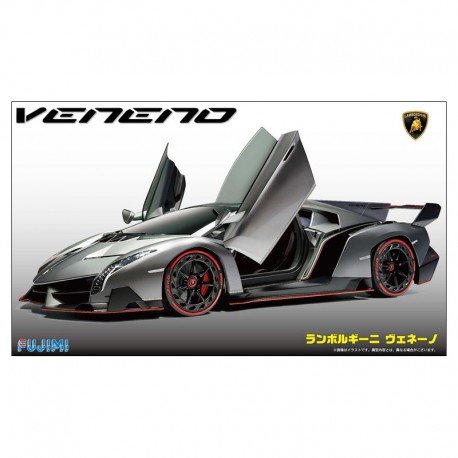 Leaving behind creature comforts to showcase its power, the Veneno can reach speeds of 221 miles per hour. Fujimi packed this car kit full of details including two sets of wheels and poseable scissor doors.

The Lamborghini Veneno is a $4.1 million exotic supercar, an extreme limited edition (only four were made), and the most expensive production car in the world in 2013. Lamborghini is an Italian brand and manufacturer of exotic sports cars based in Sant'Agata Bolognese, Italy. Ferruccio Lamborghini, an Italian manufacturing magnate, founded the company in 1963 to compete with established marques including Ferrari. Robots are taking over car factories around the world but Lamborghini is moving in the opposite direction with its exclusive hand-made approach.

The Lamborghini Veneno was named after a bull whose name means "venom" in Spanish, a fitting name for this car considering the headlights look like a snake's fangs! The engine delivers an unbelievable 750 horsepower and sprints the Veneno from 0 to 60 mph in just 2.8 seconds and up to a top speed of 221 mph. Reproducing this guilty pleasure of the ultra-rich, Fujimi managed to capture its amazing power and futuristic design in static form with this beautifully detailed plastic 1/24 scale model car kit.