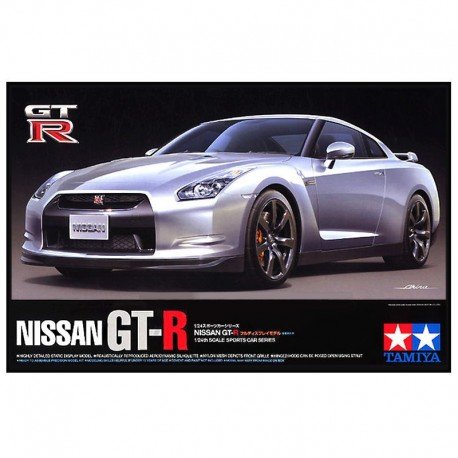 The Nissan GT-R is a Japanese 'Godzilla', crushing other performance cars on both street and track. Revell faithfully captures the GT-R's appeal at 1/24h scale. This model car kit showcases a highly-detailed engine, a poseable hood, and metal-plated parts.

Kit includes:
- Metal-plating on wheels, muffler, and induction box
- The option for an open or closed hood
- A detail-laden engine
- A set of custom Nissan decals

The Nissan GT-R's introduction at the 2007 Tokyo Motor Show made serious waves. With all of the Nissan GT-R’s advanced technology, it’s little wonder why. This vehicle earned its title of “multi-performance sports car” and a reputation for its ability to crush less versatile competitors.  Replacing its standard six-cylinder with a twin-turbo version gave it an impressive 480 horse power.  While ready for the track, the all-wheel-drive dual clutch transmission fits in on most city streets. For someone who wants more speed, the NISMO-built version of this car boosts the horsepower to 600.

Brought to you by Revell, the plastic scale replica of the Nissan GT-R manages to captures the car’s appeal with only 197 millimeters. Included in this 1/24 scale car kit are an open or closed hood, a highly-detailed engine with separate induction box, a variety of kit-specific details and metal-plated wheels, muffler, and induction parts. Bringing this performance-car crushing monster to your display case will be worth it. Its metal finishes and sleek styling will truly make this plastic model car a show-stopper!