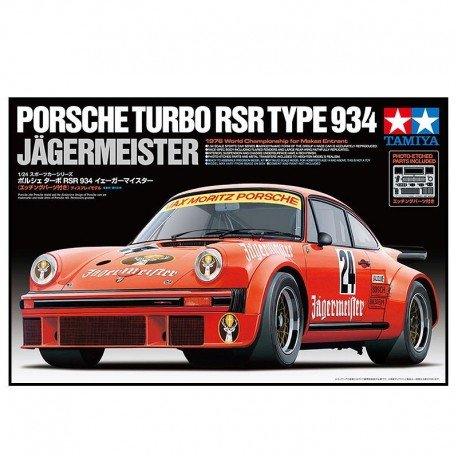 Building upon all the power of the 2011 Porsche 911 Turbo S, the development of this car proved to be a tremendous challenge for its designer. Tamiya brings this high-powered car to life with a scale model car kit which includes a highly-detailed chassis, large rear spoiler, and a set of flared fenders.

Champion Motorsports, a branch of the Maraj family’s dealership network, decided to develop a frighteningly powerful racing version of the 2011 Porsche 911 Turbo S.  From these enhancements, including a 110-unit boost in horsepower, emerged the Porsche Turbo RSR. Judging by his repeated comments about the project’s difficulty, Tim Munday (the project manager for the new version) received an upgrade as well: salt-and-pepper hair. The builder of a hundred different racing Porsches, Tim put everything into making this one the best.

After the RSR won at Le Mans, Munday had the following to say about his experience: “Man, this car was a hundred times harder than any of them [his previous designs] because it had to be cosmetically perfect and luxurious, front to back. I thought it would take six months but it took a year. I’ll tell you, I’ll never do another.” This luxury carries over into this scale plastic model car kit from Tamiya.  Molded in black and orange like the winning car, this car kit showcases flared fenders, detailed suspension, and large rear spoilers. Rich surface finishes and a detailed chassis give the miniature an authentic feel. All Porsche enthusiasts need this 1/24 scale car kit!