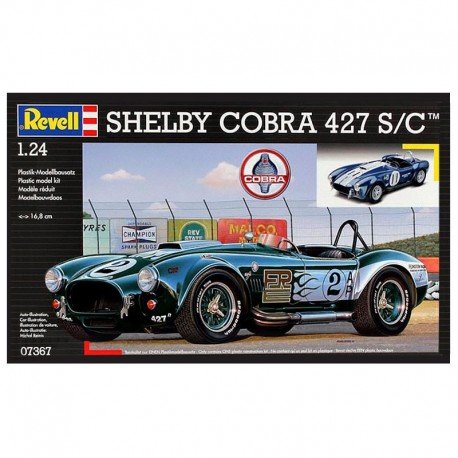 A gem in Carroll Shelby's Crown, the 427 S/C can reach 100 miles per hour in roughly 13 seconds. The next fastest, an Aston Martin, took twenty seconds. This car model kit includes a posable bonnet, highly-detailed interior, and intricate suspension.

One look at the Cobra 427 can show you why Carroll Shelby was once king. He came a long way from his initial win at Le Mans. By and far, the S/C (semi-competition) version of this sports car was the most desirable. It was a true racing car that was hastily modified to make it part of the public commute. As a result, this Shelby brought virtually unseen power to the road. Most cars on the road at the time did not even come close. The Aston Martin could reach 100 miles per hour in just under twenty seconds while the Cobra 427 SC managed the same feat in just above thirteen.

A rare sight on the road, production was limited to a handful and these cars remain a hot commodity decades later. This Revell plastic 1/24 scale car kit brings this sports car-turned-commuter to life in miniature. This 1/24 scale plastic model kit includes a movable bonnet, true-to-production wheel rims and brakes, intricate suspension and multi-part engine, a highly-detailed interior, and an accurate reproduction of both bodywork and chassis. Begin your Carroll Shelby shrine today!