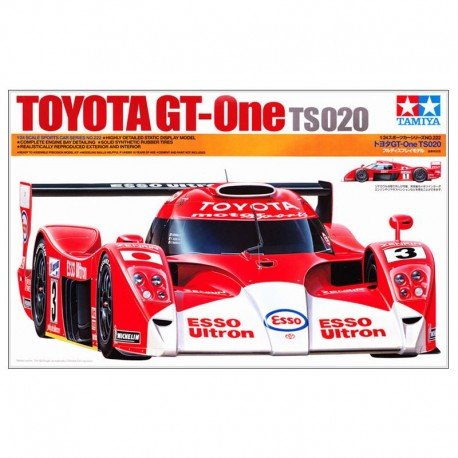 Imagine Ukyo Katayama’s horror when his leading car, the last Toyota remaining in the race, lost its tire in the last hour of the world’s biggest endurance race. How the heart-dropping pop echoed in his ears as hope and rubber scattered across the track. The Toyota GT-One fell short of dethroning the world’s racing kings in the 1999 Le Mans. Regardless of its failure, its performance earned attention. Up until that year, only a few brands were considered champion quality; that year three new brands (including Toyota) became viable competition.

A sleek carbon-fiber body, ruthlessly tweaked for aerodynamics, hid all the improvements made underneath the GT-One’s hood to improve power, torque, and fuel efficiency.  Giving you the ability to see it all first hand, this Tamiya 1/24 scale car kit showcases all the finest details of this racing machine. Aside from a faithful recreation of its innovative body-style, the plastic kit includes an intricate engine, removable rear cowl, synthetic rubber tires, masking seals, and two sets of decals.