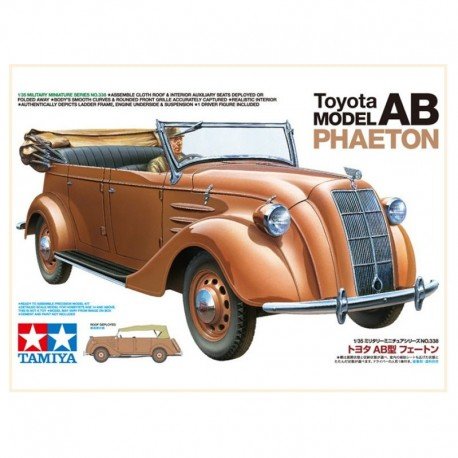 Tamiya continues its tradition of fine military model kits with the Toyota AB Phaeton automobile (‘Military Miniature Series No.338’).  Though a military subject, the AB Phaeton was originally intended for civilian use.  However, most of the 353 vehicles produced were sent to the Japanese military with the advent of the Second World War. This highly detailed and fun 1/35 scale model kit comes with 98 parts and offers two options for seats: bench seats with accurately represented texture and two auxiliary folding seats in the back which may be modeled as folded or open. Interior details include separate floor pedals as well as a gear stick and a hand brake.

Two molded soft tops are also offered for either the folded down or raised positions.  The folded down position shows off the interior detail while the top, in the raised position, highlights the detailed draped and folded texture.  The instructions are finely rendered with a paint guide and historical information to inspire your creativity.  The underside, as is typical with Tamiya model kits, is full of suspension detail.  The decal sheet includes the Toyota emblem for the hubcaps, detail for the radiator ornament as well as the instrument panel.  A driver figure is also included. If you're a modeler looking for something a little unusual to add to your collection, look no further than this interesting and beautiful kit.