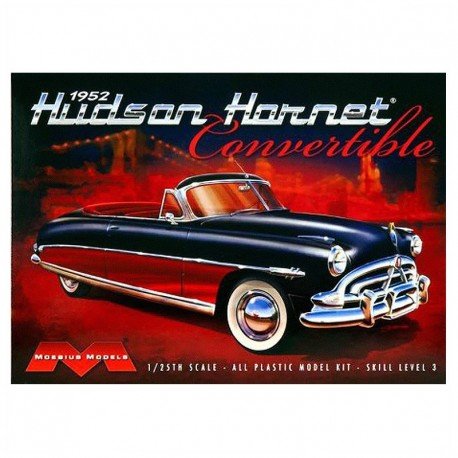 Known for blazing performance and the same level of luxury as a Cadillac, the 1952 Hudson featured a unique low-slung design and step-down chassis. Aside from replicating those features, this MPC car kit offers a detailed engine and realistically-textured interior.

This 1/25 scale model car kit is brought to you by MPC in honor of the famed 1952 Hudson Hornet convertible. Before its production moved to American Motor Corporation (AMC), the Hornet was completely designed and marketed by the Hudson company.  The low-slung appearance of this Detroit classic earned it a reputation for luxury that allowed it to overshadow the likes of Cadillac. In fact, instead of a Cadillac or Mercedes, it is a Hudson that takes the role of the retired racer 'Doc' in Pixar’s 'Cars' film franchise.

Its lower center of gravity, which increased its maneuverability, helped this stylish sedan earn awards both on and off the track. Speaking to this fact is the car's awesome record of 40 NASCAR wins from 1940 to 1955. Packing 120 pieces into its box, this plastic car kit is an all-new tooling of an earlier model car. Included inside are an authentic step-down chassis, an optional sun visor, a detailed engine, a pose-able hood, and realistic decals to add texture to both interior and exterior. Bring a taste of the 1950's king car into your home today!