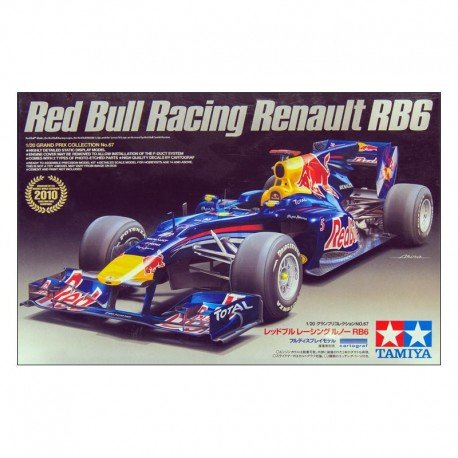 The Formula 1 Grand Prix Circuit represents the pinnacle of modern Motorsports with a season that typically runs 21 races at various circuits around the world, including the famous race at Monaco. For the auto racing and F1 model kit enthusiast, Tamiya offers a beautiful 1/20 scale replica of the winning Red Bull Renault (No. 67 in their Grand Prix Collection Series) as driven by world champion Sebastian Vettel in 2010. This particular car also won the Manufacturer's Championship that same year.

The tires are the Bridgestone slicks used during the 2010 season. Tamiya has also created a special paint color for this kit: TS-89 Pearl Blue. The decal sheet is printed by Cartograf and depicts the colorful Red Bull markings and carbon fiber mesh, and is made to fit the complex contours of the car's body. Labels for the number 5 or number 6 car are included along with a detailed instruction guide for painting and decal placement of call-outs. An included photo-etch sheet offers stencils for tire side wall logo painting, seatbelts and GPS antenna.