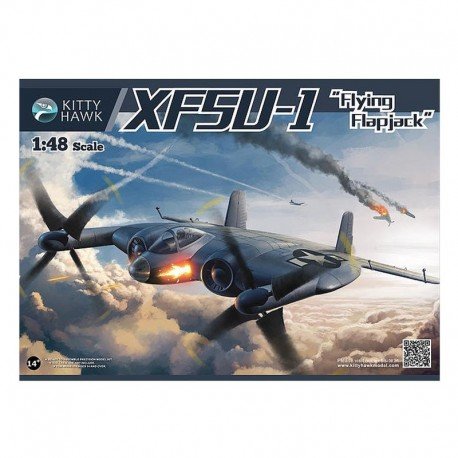 Imagine you're Charles Lindbergh test flying the latest experimental aircraft design to roll off the line. He got to do just that and you can re-live the experience in 1/48 scale with this impressive, newly tooled model airplane kit from Kitty Hawk. The scale model plane kit is nicely detailed with both raised and recessed features, detailed cockpit and landing bays with gear. The illustrated instructions are clear with simple assembly instructions, painting guide, and a waterslide decal sheet which provides markings for the two prototypes and a fictional variant.

This unique airplane is one of history's greatest "what-if"s. The "Flying Flapjack" was an experimental aircraft with a wide flat body that served as the lift surface. The two powerful Pratt and Whitney engines were designed to counter rotate, giving the craft cyclic movement like a helicopter's main rotor. Only two of these prototypes were made and of those, one never left the ground. Plans for further development were scrapped in 1947 with the dawn of the Jet Age. One surviving plane is now on exhibit at the Smithsonian.