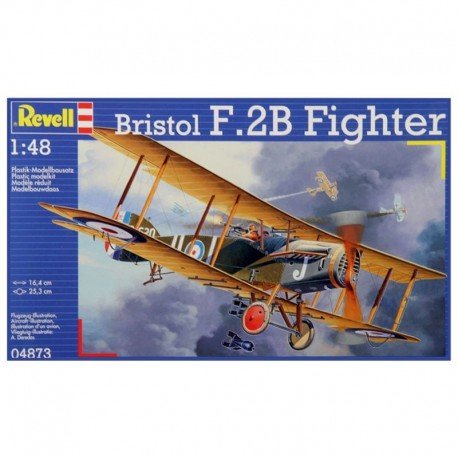 This plane was the aerial contortionist of World War One. The versatile biplane overcame rough beginnings to change military history. Built by Revell, this model airplane features a life-like cockpit and a highly-detailed undercarriage.

Jumping off the assembly line and into the hands of the inexperienced nearly spelt a quick end to this versatile biplane’s career. Poor tactics made the beginning years of the Bristol F.2B decisively sour:  five out of the original six aircraft were destroyed or crippled within their first few battles. When given to the experienced and strategical, this twenty-five-foot plane proved itself an agile and versatile adversary. Holding a place in the military until it’s decommissioning in the 1930's, in spite of its bad beginnings, the Bristol made a large impact on military history.

For many years after the war, it remained a popular civilian aircraft. This charming plastic model kit by Revell seeks to honor the past of this little biplane. Builders can pick between two or four-bladed props and two separate sets of decals.  Intensely detailed cockpit and highly-accurate undercarriage only add to the appeal of this model airplane. Perfect for any builder in love with biplanes, or World War One, the ending product is truly a sight to behold.