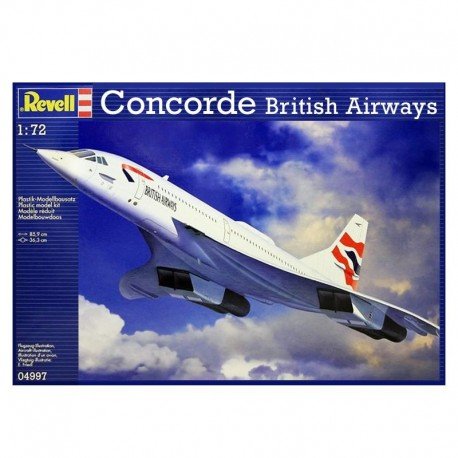 Able to complete trans-Atlantic flights in under three hours at a cruising speed of 1350 mph, the British Airways Concorde was a supersonic passenger jet airliner in international service from 1976 - 2003. This airplane model kit from Revell is a beautiful replica of an amazing flying machine.

Kit includes:
- Decals for all versions of the Concorde
- A posable nose cone
- Simple and hassle-free assembly

Although the awesome age of the supersonic airliner is behind us, this scale airplane model kit allows you to savor its wonder anew! Capable of crossing the Atlantic in just under three hours, the British Airways Concorde seemed to spell an end to overnight flights and leg cramps. An economic recession and various plane-based terrorist attacks caused the plane's production to be cancelled in 2003, but this Revell jet plane model kit allows us to experience the advanced craft from the ground-up.

This 162-piece plastic airplane kit is more appropriate for experienced builders. Included in the box are enough decals to reconstruct an individual model for every Concorde ever built, and specific ones for recreating the record-crushing G-BOAD version. Posing options include two separate positions for the nose cone and two separate versions of British Airways stencils. Intricate and charming, this scale model airplane kit offers a challenging build befitting this lightning-quick aircraft.