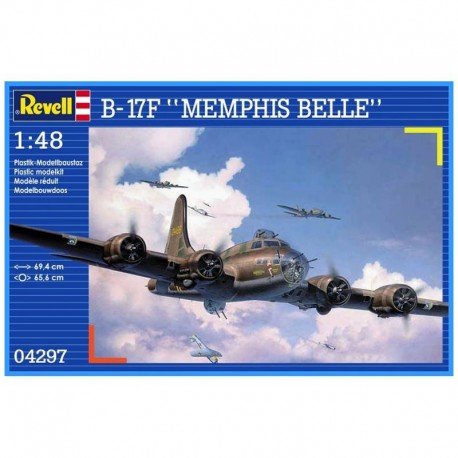 The Memphis Belle is the most famous of the 'Flying Fortresses'.  Setting the bar high, this behemoth became the first bomber to fly over twenty-five missions intact. This model plane includes movable guns, a highly-detailed undercarriage, and historically-accurate decals.

Kit includes:
- A variety of moveable guns
- A set of authentic historical decals
- Intricate and detailed undercarriage panels
- A large variety of exterior and structural details

While certainly not the most numerous - with only 12,000 ever built - the B-17 became the best-known heavily-armed strategic bomber in military history.  The Memphis Belle, much more rugged than its name implies, is the most well known of all these Flying Fortresses.  Put into service in July of 1942, the Memphis Belle served England’s 324th Bomber Squadron and 94th Bomber Squad during World War Two.  The Belle went on to become the first Air Force bomber to complete over twenty-five missions.

While the real-thing can be found in Memphis TN, this 1/48 scale Revell kit gives you a chance to see it up close and personal.  Customers will find details abound within this plastic scale model: a highly-detailed undercarriage, movable propeller, authentic decals, adjustable guns, and a large amount of structural detail. Luckily for your showcase, this fortress is feather light compared to the 35,000 lb. behemoth it’s based on. Unless you fancy a road trip to see the real thing, you can get no closer than this awesome model plane!