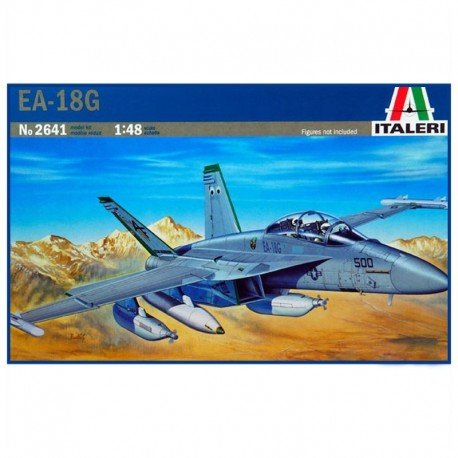 Created to replace the Grumman EA-6B Prowler, this carrier craft is a master of electronic-warfare.  Its crew of two, along with its jamming equipment, wreaked havoc upon enemy communications.  Derived directly from the F/A-18F Super Hornet, its body-shape errs towards the aerodynamic. With a maximum speed of Mach 1.8, helped along by its Hornet-like exterior, this aircraft is an aerial speed demon (regardless of what its size implies).

Inside the Italeri version of this model plane kit, a hobbyist will find a highly-detailed cockpit with instrument panel, functional and intricate landing gear, highly-detailed instructions, and enough pieces to build four separate versions of the aircraft.  Issues found in earlier versions of this plastic model plane have been corrected to better fit the needs of the modern modeler. Just in case it proves too accurate, avoid placing the EA-18G Growler close to electronic devices.