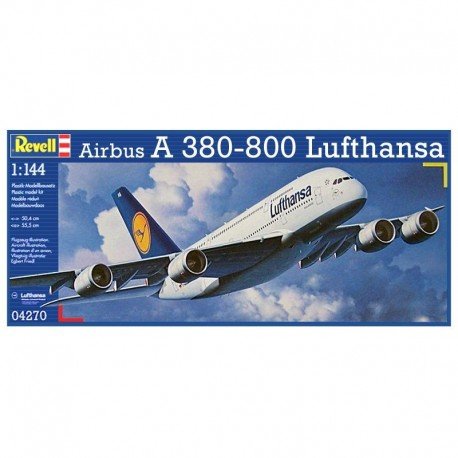 The largest commercial aircraft in the world, the Airbus can comfortably seat 550 passengers. Carbon-fiber and other composites reinforces the entirety of this double-decker air liner. The Airbus A380 commercial jet features highly-detailed cowlings and custom 'Lufthansa' detailing.

Kick your feet back and drain the champagne! Holding the title of largest passenger airliner, the Airbus A380-800 comfortably seats 550 passengers. Two-full length passenger decks separate this craft from all that came before it. Boasting Rolls Royce engines, the jet manages to remain simultaneously fuel and noise efficient. The interior cabin resembles nothing that came before it and showcases the strength of carbon-fiber reinforcement. While it made its debut in 2005, this gargantuan jetliner still remains a desirable commodity over a decade later.