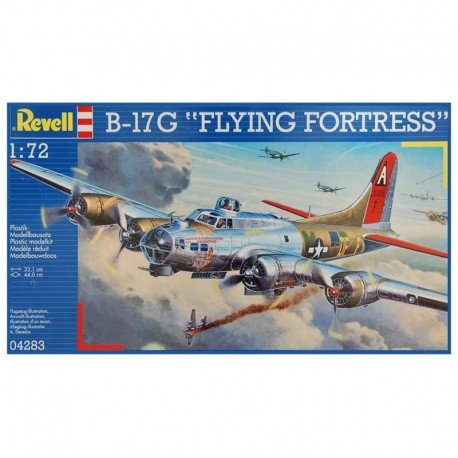 The leader of the European Airforce once stated,. Without the B-17, we may have lost the war. These flying fortresses provided a nearly impenetrable barrier to the enemies. This Revell model airplane features functional landing gear and intricate gunner stations.

In 1935, Richard Smith coined the B-17s better known moniker: ‘The Flying Fortress’. Those awed by its initial flight would never guess that its entire development took only twelve months.  Not once in its career did it show. Over the entirety of World War Two, this large rugged craft evolved into something practically impenetrable. General Spaatz, leader of the European Airforce, highlighted its impact: “Without the B-17, we might have lost the war.”

With maintenance difficult and little chance for civilian adaption, most of the B-17s disappeared after the end of the war. Only a few museums own a recognizable craft of this type. With this high-quality and easily-assembled model airplane, any hobbyist can have the chance to own the savior of the European front. Inside this plastic kit rests a detailed interior, intricate gunner stations, bright silver detailing, functional landing gear, plenty of waterslide decals, full interior framing, fully-detailed cowlings, and a large variety of armaments.