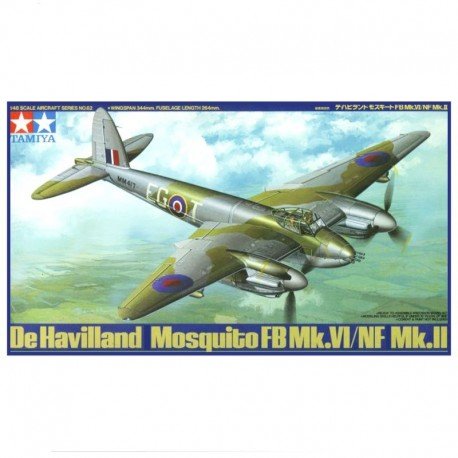 This wooden-fighter defeated enemy upon enemy in its illustrious life time. The Mosquito could reach 630 kilometers per hour. Brought to you by Tamiya, this model airplane kit features beautiful detailed wheels and a variety of options.

Imagine taking flight in a craft made entirely of wood, something we might now term a 'child’s toy'. But the sting of this wooden fighter fell many an enemy during WWII. Its less-than-intimidating name meant nothing in the face of the enemy’s armaments but this lightweight aircraft, reaching a maximum speed of 630 kilometers per hour, possessed multiple machine guns and enough capacity to hoist twelve large bombs. The newest plastic model of the De Havilland Mosquito from Tamiya does all it can to imitate life.

A removable nose peels back to reveal four .30 caliber cannons. Inside the box rests an oil-tank, a set of beautifully detailed wheels, poseable bomb bay doors, two 500 pound bombs, a choice of under-wing munitions, a working crew entry door, the choice of wing-type, and a selection between narrow and wide chord propellers.  With its carefully-crafted Tamiya fitting, many reviewers state that it practically puts itself together. Coupling its inspiration’s history with the value in the box, this airplane model kit deserves a place in your display case.