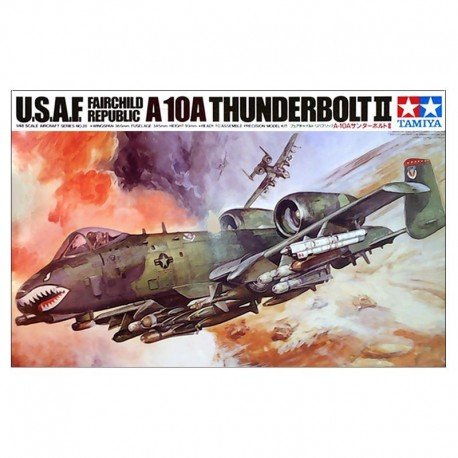 Originally developed during the Vietnam conflict to enable pin-point accuracy, this plane was manufactured by Fairchild Industries. The Warthog proved highly successful in combat. Plenty of excellent features set this model plane apart from its competition.

A dire need for pin-point accuracy during the Vietnam War lead to the development of the A-10 Thunderbolt II. A lot was demanded of Fairchild Republic Industries during this aircraft’s development: high-quality operation on short fields, maneuverability at all speeds, strong pilot protection, an ability to carry mixed weapons loads, and the ability to travel long distances. The “Warthog”, a nickname given by its pilots, is a wonder both inside and out.

Aside from its unique front end, this craft comes packing lots of 'heat': cannons capable of 4200 rounds per minute, a fire control display, a laser targeting device, and a capacity for a large amount of mixed weapons. The Tamiya plastic model replica of this plane comes armed with lots of detail and various features. This scale model airplane sports finely-raised panel lines, poseable landing gear, exhaustive turbine detail, and a staggering amount of outside stores and armaments. With its recent successes in the Gulf War, this plane - and therefore its kit - won’t be disappearing anytime soon.